Martina Beck Applications of the SANZA System in Olympic sport

From: Günther Beck To: Petra Pichler; Mühlegger Christina
Subject: SANZA system
Hallo Petra & Christina,
I‘m sending you a picture of Martina lying on the mat in Hochfilzen.
Martina and the girls having been making regular use of the new SANZA system since November and are so far, as far as I know, highly satisfied with it. Martina tells me that she lies on the mattress at
least twice a day and uses the Helmholtz device on her shoulder muscles. The application of the SANZA system is an important piece of the jigsaw in supporting athletes, not only in regeneration and injury prevention, but also in the activation of metabolism before competition. We and all of the DSV ladies‘ biathlon team would like to wish you a merry Christmas and happy new year.
Best wishes, Günther & Martina 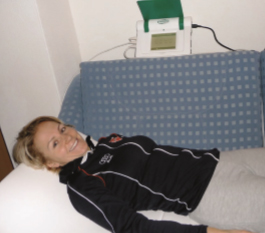 Mr. M.‘s artificial hip came loose while he was taking off his shoe, and it was necessary to install a new hip joint (the patient‘s third artificial hip). Immediately following the operation a wound contamination containing resistant bacteria was found. As the bacteria were of the E. coli variety, the broad range of antibiotics applied had no effect and the hip had to be removed,
with the result that Mr. M. was forced to live without a hip, being henceforth confined to bed. This was intolerable for Mr. M., and his children sought help with Mr. Eberherr, who prescribed three weeks of intensive treatment with Sanza whole-body application and biofrequency chips, following which no more resistant bacteria were found. 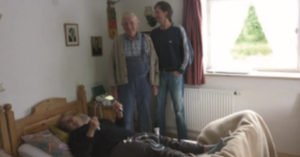